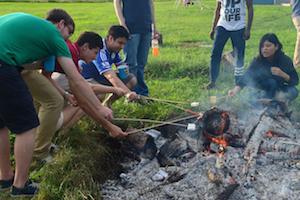 Last spring, I was able to participate in a very fun, social activity with fellow students and teachers from the INTERLINK at Indiana State University (ISU) program. We built a bonfire and had time to spend with each other hanging out, talking, eating, and playing games.

The bonfire was organized by the teachers of the INTERLINK program. Students from INTERLINK helped set up and organize the activities. In addition, each student helped out by bringing some type of food item to share with the others. The students came from all different countries like China, Japan, South Korea, Saudi Arabia, Brazil, America etc.. The purpose of INTERLINK is to help students from different areas learn to communicate with each other and with Americans using English. Several students brought their friends and families to enjoy the activities. 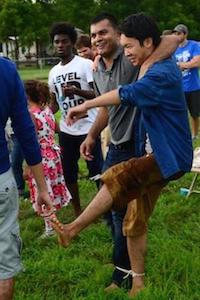 Throughout the day we had several types of food. Several people roasted hot dogs, had chips, hamburgers, and drank juice. We also had sweet items for dessert like cookies and marshmallows, which were later made into s’mores. My favorite was the s’more, which are roasted marshmallows with chocolate on graham crackers.

After eating, everyone split up into different groups to play games. Some people played soccer, some did a balloon-shaving race game, and others did the three-legged race. I played two of the games. I enjoyed doing the three-legged race with my friend Daiki, who is from Japan. We won two times. I also played in the soccer game with him as well. During the soccer games, I accidentally kicked Daiki in the shin and jammed my toe. I am not a big fan of soccer since I do not know how to play very well. What I enjoyed though was the water fight we all had later in the day. We filled cups with water and splashed each other and ran around and had a good time.

To end the day, we all went and sat around the fire to share stories and eat marshmallows. I enjoyed spending the day with all of my friends and having fun. There was a lot of laughter and good times all day.